Toufic Abdul-Al was born in Acre (10 Mar 1938). His father was a grain and butter wholesale and retail dealer. Palestine at the time was staying in a rebellion state, revolutionists were the masters of the situation.

The house he lived in Arce was an old three-storey house with ornamented ceiling and an ivory staircase overlooking the sea. On the third storey, there were high copper beds. Inside the house were arches, old windows and ornamented red brick tiles on the roof, all this had given him a background influenced greatly by eastern decor and interior decoration concepts.

He used to flee to the western beach in Acre where he watched the fishermen and envied them for their “liberation” from the desk and the blackboard. Their big nets were always interesting and seemed attractive to him. He enjoyed listening to their songs and watching the reflection of their red boats on the blue water of the sea. These scenes took a large place in his work in the sixties, especially during “The Blue Phase”.

Behind the “Buckboards" the child used to run and clings to its bars a stealthily sneaks away from his family to the "Al-Khamamir" quarter. He used to stand outside the night clubs ‘offering the jasmine’ for the nighthawks. With the little money he earned he arranged for himself a strange trip between Acre and Haifa. When his train reaches its station in Haifa, he got off and stayed on the platform, waiting for the same train to take him back to Acre.

On the way he was looking for the "mill", his grandfather was called” The Miller” because he owned a mill on the way from Acre to Haifa. His grandfather, forcibly conscripted by the Turks, was killed in the battle of Bir Al-Sabi’ (31 Oct 1917) when the British occupied the town during the first world ware. He left the mill to his son who later shifted to trading. We can see the mill and the jasmine have sneaked into many Abdul-Al’s paintings of the sixties.

To the story -telling café "Al-Dalalin", his father used to take him to listen to the stories of Antar, Al-Zir and Abi Zaid. From those tales, he would retain in his memory the story theme of the tale, the legendary knight, and the giant.

His father used to attend the cinema regularly, satisfying his desire to see the films of Tarzan and the Flying Man in the only two cinemas in the city at the time, Al-Burj and Al-Ahly. He took advantage of the fact that the ticket-seller of the Al-Ahly cinema was their neighbor Khalil Al-Hindi, nicknamed Al-Assi, so he was able to watch the movies for free. Then he used to go to Khalil's father (Ahmed Al-Hindi) house to enjoy watching him painting on the stained glass. Ahmed Al-Hindi was from Akka immigrated to India and stayed for twenty years, later he came back with his Indian wife and was nicknamed “Al Hindi -the Indian”. In late stage of Abdul-Al’s work the stained glass became part of the colors and their gradations.

In town, children were permitted to accompany their mothers to the Pasha's Hammam, the public bath which was famous for its glass-ornamented domes, its copper jugs, its doshas, ​​and its circular adrenaline. At a late stage in his life, dozens of his paintings made use of this subject, although not directly of in detail.

One thing that remained in Abdul-Al's memory was his interpretation of the relationship between Zionism and painting.  Jewish settlers were carrying paintings and drawing boards, when they passed Al Fakhoura Square near his school, they gifted children ink pens and bars of chocolate.  Not long after, horrific explosions followed. He remembers the sight of his classmates’ flesh stuck to the walls. He fled home in panic. It was a coverup mission for the Zionist who killed the children as a cover up for the raid on Acre prison to free Zionist prisoners out of it. At the school in Acre, his arts teacher, George Fakhouri, arranged an exhibition of Toufic’s paintings when he was only 9 years of age. His paintings were in watercolour and coloured chalk. Among the paintings was a black woman carrying a bunch of jasmine, and whom the pupils recognised as the woman living next to their school.

In March 1948, Toufic Abdul-Al's family headed to Lebanon. On the one hand, the well-to-do family was accustomed to summer there, and on the other hand, the father wanted to keep his children away from the events of the war in Palestine until the situation calmed down and then they return to Acre. The family resided in Hammana, one of the Lebanese villages in the Baabda district in the Mount Lebanon governorate, then headed to Sidon to escape the cold, and there the family heard of the fall of Acre, and since that date, Toufic Abdul-Al began to form a new identity in his forced exile. 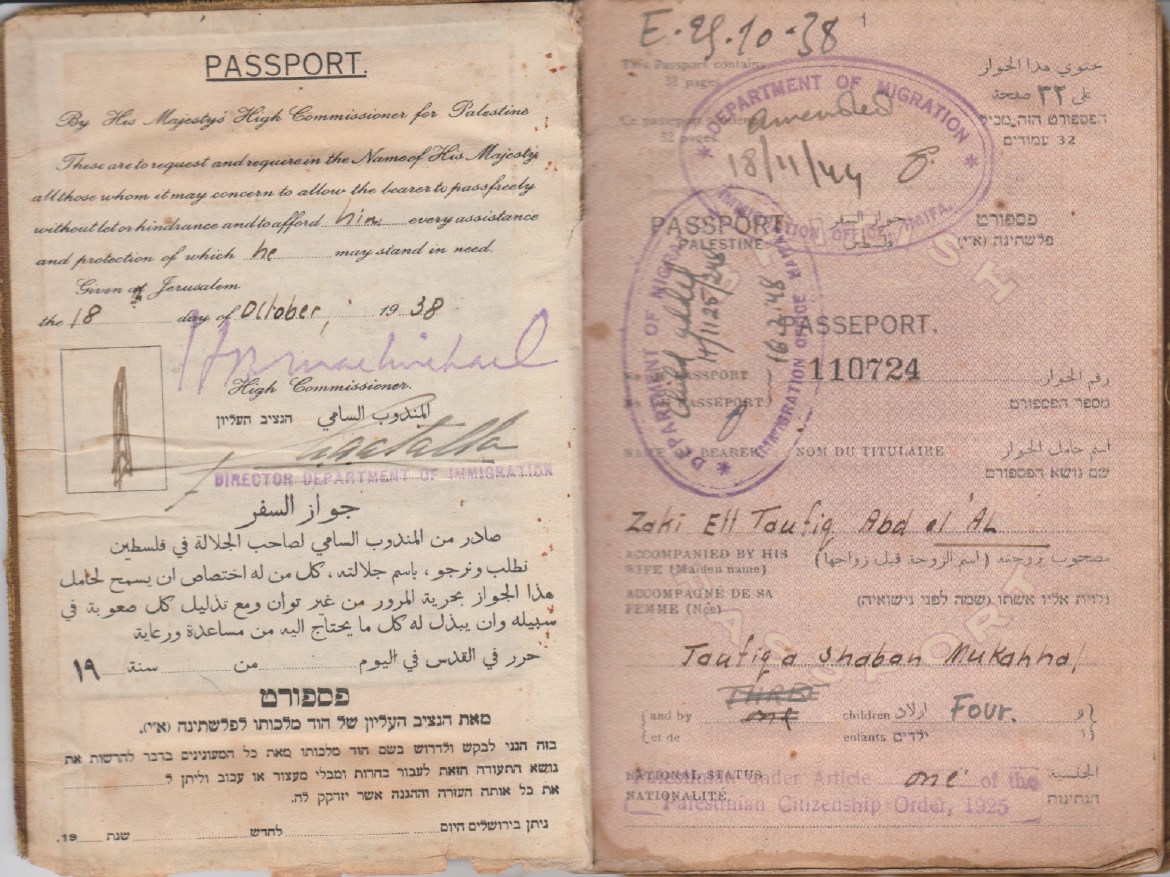 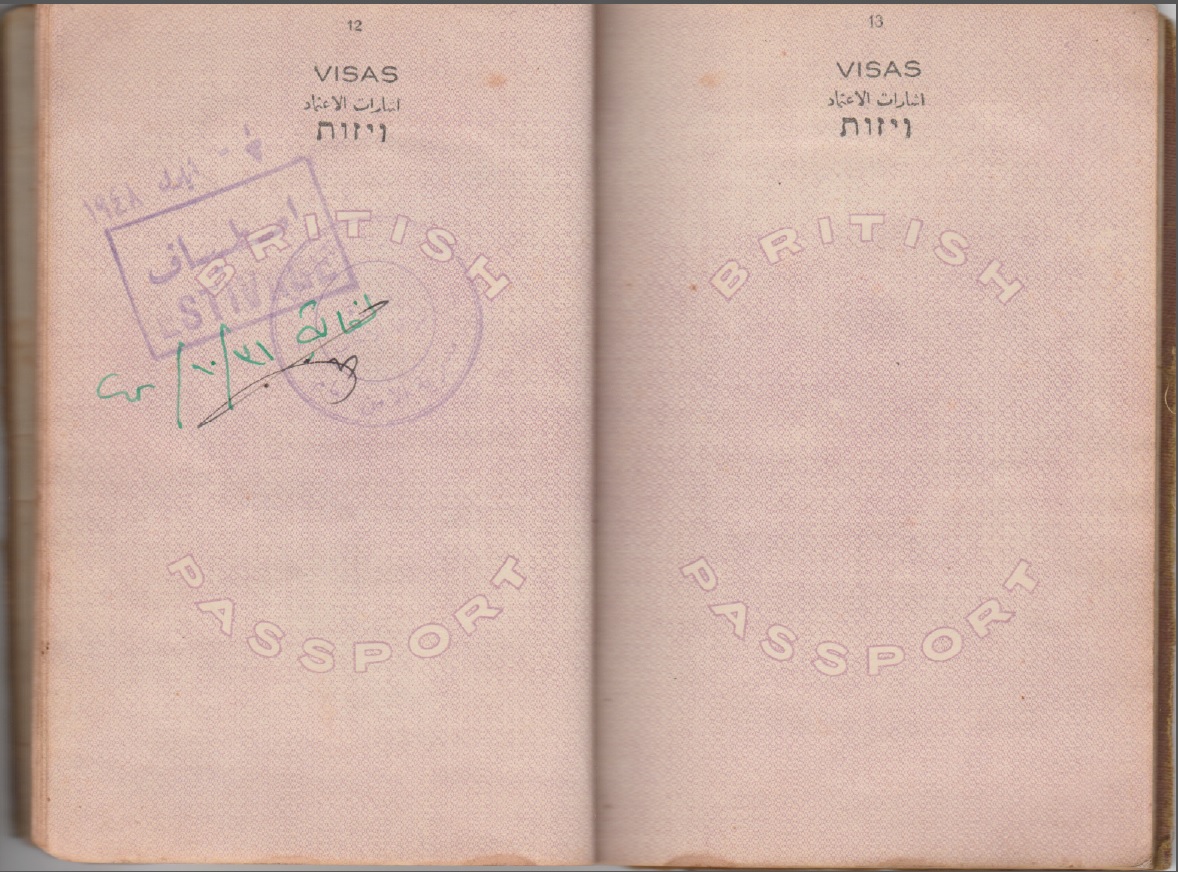 The father passport and entry stamp to exile -1948 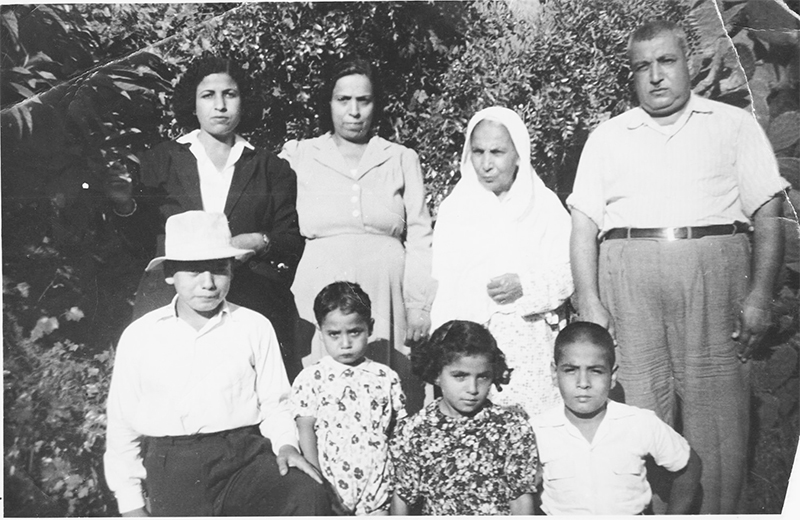 However, the diverse, anxious, and rich visual experience bequeathed by the Artist Toufic Abdul-Al, puts students, enthusiasts, and tasters of visual art in front of several challenges. These challenges rise through the circumstances faced by the pioneers of the visual arts movement in Palestine, as they are considered part of the Palestinian nation which went through an exceptional traumatic experience after Nakba, represented by displacement, asylum, family separations and the demolishing of Palestinian city centers which were witnessing huge cultural development in many creative fields, including the field of visual art. These challenges manifests in the disconnection Al-Nakba left in the evolution of the Palestinian visual art movement, then for this movement to continue later after 1948 by the hands of visual artists from within home and all those scattered around, who provided their visual experiences within very special circumstances enforced by the nature of the place and the culture of the place where each one of these artists lived. 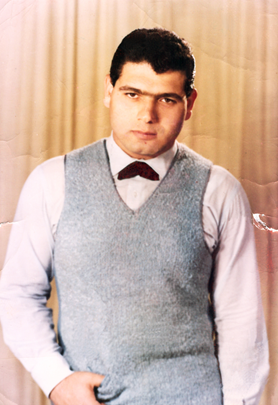 In addition to what is previously mentioned, there are serious difficulties facing the process of collecting the visual legacy of the Palestinian art pioneers -before and after the Nakba-, which is a very essential process for the purposes of categorizing this legacy, documenting it, studying it, and analyzing it. Same with Toufic Abdul-Al works which got destroyed four times in four different locations. For example, the artist Abdul-Al, born and raised in Acre, who settled after Nakba in Beirut near Burj Al-Barajneh camp, went through many exceptionally difficult circumstances, apart from displacement and loss of homeland and the life of asylum, he also witnessed the wars and conflicts which Lebanon went through over the past decades, he even got assaulted in the year 1987 within an attempt to execute him by the hands of Lebanese militias. During this assault, his eyeglasses broke and hit his eyes which caused damage to his retina. This incident which gradually caused Abdul-Al to lose his eyesight later on, brought the curtains down to over 30 years of his visual art career, but only for him to find in writing and poetry later on, an alternative creative world from drawing and photography to resume his career with. He wrote dozens of poems and thoughts which can truly be considered a literal expression of Abdul-Al’s visual experience, even more, it is a continuation to this visual experience but with the use of new tools borrowed by this artist from the worlds of poetry and literature.

Abul-Al’s works have been damaged and destroyed four times; In June 1982, the Israeli air force bombed “Dar Al-Karama” in Beirut, which was an exhibition hall of the General Union of Palestinian Visual Artists. Meanwhile, Toufic Abdul-Al had held an exhibition in the hall that included twenty-four paintings of his works that were completely destroyed during the bombing. The artist also owned a studio in Acre Hospital, adjacent to the Shatila refugee camp, when in September 1982 -during the events of the Sabra and Shatila massacre- the hospital and doctors were attacked, and the hospital was destroyed, including Abdul-Al’s studio, which contained some of his works in addition to some unfinished works, and it also contained his art archive, which included exhibition brochures, articles and documents about his work, and this archive was completely destroyed. In 1984, during the civil war in Lebanon, Lebanese forces raided the headquarters of the "Democratic Front for the Liberation of Palestine" and confiscated its contents, including an entire archive of posters of the revolution made by the artist. Finally, during

the Israeli war on Lebanon in 2006, the artist's house was bombed and many of his works and archives were damaged, including brochures, articles, and other documents.

This study traces the visual artistic path of the artist Abdul-Al, which was not separate from his human experiences and wisdoms that he accumulated under harsh conditions, starting from displacement from Acre, and passing through the harsh life of asylum in Lebanon which witnessed many conflicts and wars. Although Lebanon was witnessing a renaissance from which the artist benefited in a way that enriched his cultural, visual and literature experience, on the other side, the other face of the place was represented in the escalating feelings of hatred and racism that were increasing towards the Palestinians in Lebanon, which in return caused the artist eventually to lose his sight and stopped his drawing career and start his writing career, where he found an alternative creative world until he passed away from this life in 2002.

To trace the human-visual journey of the artist Toufic Abdul-Al, the study begins from Acre, his birthplace, and the place where his first cognitive identity was formed. Then it briefly overviews the beginning and evolution of Palestinian visual arts in the first half of the twentieth century, and the disconnection Al-Nakba caused in the evolution of this movement, because of its importance to create a comprehensive look over the conditions in which the experiences of Palestinian artists were developed after the Nakba in general, and the conditions that produced the experience of Toufic Abdul Al in particular. The study moves then to talk about the life and experience of the artist in Lebanon, both -as an exile and as an alternative homeland-. The pivotal part of this study is that which sheds the light on the different artistic stages in his career, which were divided based on the different topics that Abdul-Al addressed in his works, which are: The blue stage and its center is Acre, the location, the woman, the revolution, and Sufism 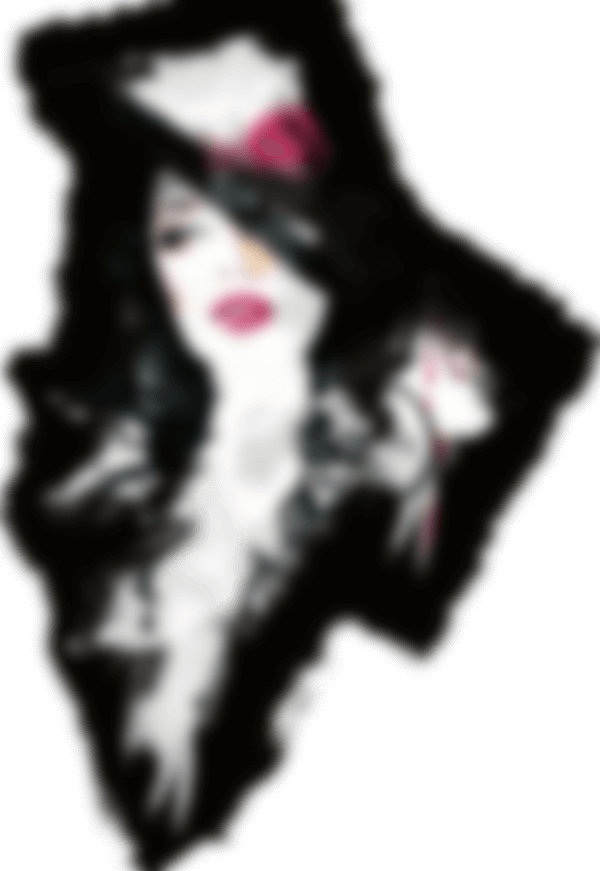